The permanent exposition portrays the course of Slovak painting in the 19th century by way of a cross-section. Attention is paid mainly to portrait painting (Czauczik, Klemens), but also to the landscape subjects from the second half of the 19th century (E. Ballo, L. Medňanský, D. Skutecký, etc.). The largest focal point is the creative personality of Peter Michal Bohúň. The collection is supplemented with the works from the beginning of the 20th century whose nature and artistic expression are rooted in the previous century (J. T. Mousson, A. Ballo, A. Kubínvi, E. Halász-Hradil, F. Kyselý, P. J. Kern and the early work of G. Mallý, Benka’s paintings, etc.).

Klemens’ significance as an artist predominantly lies in painting portraits. He focused mainly on representative portrait paintings. His romanticism is characterized by romantically-dramatically styled backgrounds of portrait paintings, e.g. Podobizeň súrodencov (The Portrait of Siblings, 1882). He also did sacral paintings, along with ceiling paintings in churches, e.g. in Bobrovec, Sučany, etc.

Figurative painting becomes a focus of artistic attention. A new kind of painting emerges along with this – genre.

Artists engaged in genre painting in Slovakia include:

Dominik Skutecký: Pobožnosť (Piety, 1891), the largest painting in the exhibition halls of the Liptov Gallery. A man of Jewish background, the artist lived and worked predominantly in Bánská Bystrica. He was instrumental in the cultural development of Slovakia.

Gustáv Mallý was a representative of the Slovak impressionism – Na dušičky, (All Souls’ Day, 1910). In Bratislava, he founded the first ever Slovak art school. His students included E. Š. Martinčeková, J. Murdoch, J. Želibský, L. Čemický, and others.

What’s also worth mentioning is a board with the miniatures of works from the early 19th century, usually done by unknown artists. Apart from detailed paintings on various materials, there are amazing frames made from wood, ivory, velvet, or plaster.

Slovak landscape painting in the period of national romanticism was deliberately striving to poetically celebrate and heroize the Slovak landscape. The dramatic and theatrical mountain massif of the Tatra Mountains with its steep slopes served as a frequent motive as the mountain range has always been tied to the very idea and notion of Slovakia.

Ladislav Medňanský – Les s potokom (The Woods and the Brook, 1910) – his work was a culmination of the 19th century landscape efforts. Over the course of his life, he’d done over 6,000 paintings. Our gallery owns 317 of his drawings, sketches, and drafts, 120 of which have managed to be restored.

Peter Július Kern – Zima na Demänovke (The Winter on the Demänovka River, 1934-1936). A painter and restorer who proved to be a melancholy disposed romantic in his paintings of Liptovsko’s winter landscape. The Demänovka River flowed through the artist’s garden, and thus became a constant motive of his paintings. After World War II, he restored a number of churches, e.g. the catholic church of St. Nicholas in the Liptovský Mikuláš’s square.

The exhibition halls show sculptures by Alojz Štróbl, a Liptov native who ranks among the most important sculptors of the 19th century. Living in Budapest where he gained a high social status, recognition, and fame, Štróbl returned to his native Liptov each summer to regain his strength and inspiration. Here, he created a lot of his clay, marble, and bronze statues. Focusing mainly on portraits – busts, headstones, monuments, and monumental statues –, he nevertheless loved to model animals and family members.

Podobizeň cisára Františka Jozefa I. (The Effigy of the Emperor Franz Joseph I., 1890) – cast in bronze, the uniform displays a medal with the Slovak coat of arms. Notably, Alojz Štróbl was the first ever Hungarian sculptor to have the emperor Franz Joseph I. sit as a model.

He created the sculpture Naša matka (Our Mother, 1896) which embodies the fervent filial love and respect. The Paris Louvre registers it as one of the most perfect sculptures in the world. Its bronze copy stands in front of the P. M. Bohúň Gallery, Liptov.

Enter the 19th century exposition and admire the beauty created by local artists. 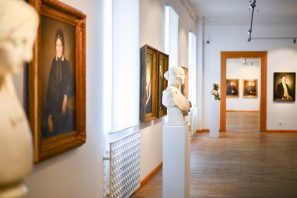 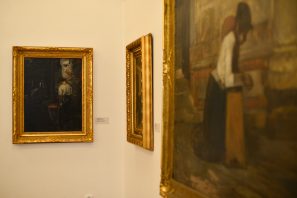 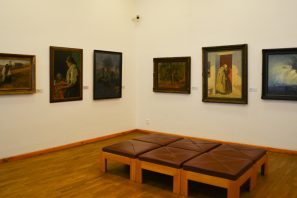