This permanent exposition outlines the course of Slovak painting in the first half of the 20th century, presenting the founding generation of modern Slovak art whose subject matters usually focused on the countryside, and later on urban and intimate settings. The exhibition includes painters influenced by Art Nouveau, symbolism, or expressionism (Zola Palugyay, Anton Jasusch, Edmund Gwerk); artists with a connection to European modernism (Ľudovít Fulla, Mikuláš Galanda, I. Weiner Král’); members of the so-called Generation 1909 (Ján Mudroch, Ján Želibský, Ladislav Čemický, Ester Š. Martinčeková), and others.

Gustáv Mallý, an academic painter, a pioneer in Slovak modern painting, teacher, and exhibition organizer. In 1911 he founded the first ever private school of fine arts in Bratislava. His initial students included Ľ. Fulla, J. Želibský, J. Mudroch, E. Šimerová Martinčeková, and others. The only subject matter of Gustáv Mallý was Slovakia – the human being in parallel with the world. The subject of motherhood came to denote Slovakia in his work, e.g. Šťastná matka (Happy Mother, 1938).

Ľudovít Fulla, a Ružomberok native, graphic artist, illustrator, and a painter of joy and bright days. His work celebrates the pleasures of life, mainly via red and yellow hues. Slovak folklore served as his primary inspiration. He strived to use the available area to its maximum potential, painting even the frame of his pictures, e.g. Poľnohospodárstvo dnes (Agriculture Today, 1957). In return for being able to build and run the Ľudovít Fulla Gallery in Ružomberok he donated vast collections of his work to the state.

Martin Benka, a painter, graphic artist, and illustrator. He monumentalized landscapes and heroized Slovaks, using enlarged details, imperfect special relations, and muted colours with earthy and bluish hues – see Šumiac (The Šumiac Village, 1934). Through his range and outstandingly significant work he expressed a genuine love, respect, and admiration for Slovakia, its nature and people. Most of his paintings capture the Slovak nature, monumental natural sceneries, high clouds and vast skylines, flatlands and rippling fields, all of this in rare harmony with humans – see Pod Poludnicou (Under the Poludnica Mountain, 1932). He loved to portray people on meadows, in fields, clearings, or mountains. His work contributed to the development of book illustrations in Slovakia. Since Benka had no direct descendants, he bequeathed all his property to the nation.

Mikuláš Galanda, a lyrical painter of beauty and female grace – see Matka (Mother, 1932). Galanda’s paintings have a social sub-text as his work is focused solely on urban settings. He portrayed the urban motives, which were typical for the everyday life in cities, artistically and in a high formal quality, using contrasting areas alongside well-styled shapes and lines. In Slovak art, he sought a modern expression that would result from the nature of intrinsic Slovak character. He characterized the Slovak setting as “melancholy, firm, and slightly angular” – just as his paintings.

Vincent Hložník, a painter, graphic artist, illustrator and also a sculptor. Fight for humanism and progress was the main motto of his vast work which he used to combat fascism. His graphic art and illustrations featured themes of family, women, and motherhood – see Slovenská Rodina (The Slovak Family, 1943). He was instrumental in the advancement of Slovak graphic art, stressing its usefulness for portraying the most pressing issues of the day. His work can also be found on postage stamps.

Bedrich Hoffstädter, a painter and teacher of arts, influenced by the Czech modernism. Apart from oil he also used the aquarelle-gouache technique – e.g. Milenci (Lovers, 1940). He was interested mainly in the beauty of modern life, portraying sports, movement, and urban landscape. Hoffstädter died in a car crash in Liptovský Mikuláš.

Alfonz Groma, a sculptor and medallist, he tried to convincingly capture the expression and psyche of the portrayed. Groma created monumental sculptures, such as monuments of liberators, or decorative sculptures intended for public spaces, having a special affinity for depicting people in motion – see Garbiar (Tanner, 1952). The relief portrait of P. M. Bohúň at the Gallery’s entrance is also one of his creations.

Ladislav Čemický, an academic painter, did portraits, genre paintings, and lyrical natural sceneries of Liptov – e.g. Leto na Liptove (Summer in Liptov, 1940). As he liked to say, he was born in one of the most beautiful places in the world: in the middle of Liptov, a region full of pastures and soft grass. He set out for a study trip to Paris where he regularly met with Pablo Picasso. The stay in Paris brought civility to his work, along with an interest in social issues (unemployment, fascism, military) and outskirts – e. g. Vražda v Paříži (A Murder in Paris, 1936). His post-war work is dominated by landscape painting (watercolour cycles), genre compositions, and formal portraits. To this day he’s considered a father of modern Slovak watercolour as he used the technique quite to his advantage.

Ester Šimerová Martinčeková, a Bratislava native, prominent Slovak painter and artist, and a leading member of modernism who pursued scenic art as well as applied decorative arts. Out of the various painting schools, she related most to the 1920s synthetic cubism. In terms of motives, her work focused on landscape and nature, as well as figurative compositions and still lifes – see Zátišie s citrónovou kôrou (A Still Life with Lemon Peel, 1976). Šimerová Martinčeková was a distinct artistic figure who developed the legacy of the avant-garde in the Slovak visual art. While residing in Bratislava, she painted Žena s bielym kohútom (A Woman with a White Cock, 1941). In 1998, her life’s work received the Miloš Bazovský’s Award for Artistic Achievement from Matica Slovenská Foundation.

Other leading figures in Slovak arts whose work is national in nature and developed mainly in later periods include J. Alexy, M. A. Bazovský, Z. Palugyay, and others.

Janko Alexy, a painter, writer, journalist, and cultural organizer, he initiated the founding of the P. M. Bohúň Gallery, Liptov . Alexy was one of the founders of modern painting. His unorthodox view of artistic and literary tradition found a voice in his work – e.g. Dedinčanka (Villager, 1931). Alexy’s paintings were also abound with themes of brigandry – e. g. Hôrni chlapci (Mountain Boys, 1921). He primarily used pastels, a particularly favourite instrument of his, employing it as a painting tool to portray figures, architecture, or natural sceneries. He founded an artistic community in Piešťany which lasted for approximately three years. Alexy’s artistic activities were closely related to his literary work which was based on personal experience, often autobiographic and memoir in nature. His awakening to the nation’s culture and the beauty of its historic sights resulted in an initiative to save the ruined Bratislava Castle and the Pongrác Curia in Liptovský Mikuláš.

Zolo Palugyay was a painter and graphic artist from Liptovský Mikuláš. After graduation, he settled in Bodice in Low Tatras where he created his paintings and tapestries. Inspired by nature, villages, and life stories, that’s where he found his motives – see Vdovy (Widows, 1932). He drew and painted cottages, men and women in various stations in life, stages of day, and seasons. His work also contains numerous still lifes and some portraits. A further influence on his artistic vision can be found in his trips with Alexy and Bazovský. Palugyay, he died young, deep in the mountains while working on his paintings.

Miloš Alexander Bazovský, a grand figure in painting, his work is one of the most important and most in demand at Slovak auctions. It captures landscapes, promotes sharp edges and ornamental compositions with earthy colours partly disrupted by contrasting red and green hues – e.g. So Senom (With the Hay, 1949). Bazovský relentlessly and systematically used pencils, ink, charcoal, chalk, and sepia in order to brilliantly depict the most important dimension of a motive. He liked to wander around Liptov and Orava, creating a unique chronicle of Slovakia – see Čudný vták (A Strange Bird, 1952).

Jan Hála, a Czech painter, graphic artist, and illustrator. He lived in Važec from 1923, developing his rural-genre work, documenting and celebrating the distinctive identity of the submontane countryside. He’s known for his folk paintings, as well as illustrations for children’s books and textbooks. What distinguishes him in the context of Slovak art is his monography on a single topic: Važec, see e.g. Zo starého Važca (From the Old Važec, 1932). Another part of his work is displayed in the Jan Hála Gallery in Vážec.

Peter Július Kern, a painter from Liptovský Mikuláš, one of the few professionally trained restorers at the time. He took part in the preservation of the artworks from the St. Elizabeth’s Cathedral in Košice, as well as those from the parish church in Levoča. His paintings are not only sold at auctions in Slovakia, but also abroad. Remaining basically as a conservative painter, he was unable to completely come to terms with modern art. Kern pursued landscape painting, portraiture, figurative painting, and still lifes – see Pieseň zimy (The Song of Winter, 1926). He also engaged in meditative contemplation and wrote poems.

The works of artists from the first half of the 20th century represent the most important values of Slovak modern art and are not only part of national, but also European culture. 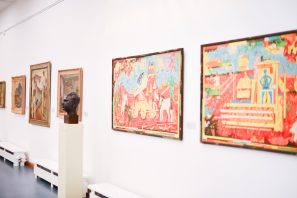 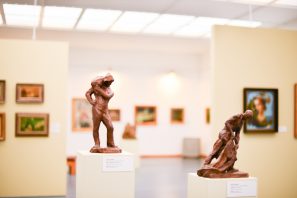 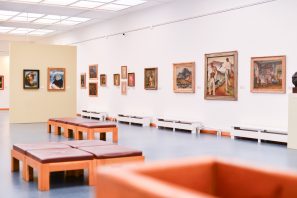