The title of the permanent exhibition explicitly refers to a work by Franz Linder, portraying the theme of The Origin of Painting. This oil painting was completed in 1786, and its content and formal execution make it one of the most striking exhibits on display. But also included in the title, implied in The Origin of Painting. 15th - 19th Century Paintings, Icons, Sculptures, is the fact that the visitor is to be shown the most original, in the sense of oldest, works in the collections of the Liptov Gallery of Peter Michal Bohúň. In a transferred sense, one may say that the exhibition offers an opportunity to look at the chronological beginnings of painting, icon-making and sculpture in the gallery’s collections, given that a large number of the exhibited objects had hitherto been lodged in the Liptov Gallery’s depository spaces and thus out of sight of viewers. Thanks to restoration work, it has been possible to relocate these artistic products from the depositories to where they properly belong: in the exhibition rooms. Apart from works in the Liptov Gallery’s collections, items on long-term loan from the Slovak National Museum in Martin are also part of the exhibition.

A common denominator of the exemplars on display is diversity. The viewer has the opportunity to become acquainted with works of differing type classification and formal execution; he or she will encounter a great variety of genres and themes, numerous artists (most of them anonymous and unknown), and widely separated times and places where particular artworks were produced.

With the relocation of the artworks on display from their authentic settings and primary socio-historical structures to their new station in the gallery, some of the original functions of these works receded to the background, while other functions took on added significance. The winged altars, the sacred paintings on wood, and the statues of saints, free-standing or incorporated in the totality of the altar, were not simply meant to fill up and decorate spaces in the churches where they were originally situated. At times when accessibility of books was limited and literacy could not be assumed, visualisations of events from the Old and New Testaments and from legends of the saints constituted the Biblia pauperum, “the Bible of the poor”. With the help of images, the general population was more easily able to acquire knowledge about the essential truths of faith. Portrayal of the deeds of saints also fulfilled the function of models worthy of imitation. Last but not least, these works were a kind of spiritual mediums. Depicted figures were intended to mediate contact with God for the people. This applies also to icons. In connection with icons, even today the phrase “window to Heaven” is often used, which still further accentuates their mediating function. In the case of portraits, also represented in relatively large numbers in The Origin of Painting, the relevant function was above all representative, (self-)affirming and memorial. Those portraits originally located in castles and aristocratic seats were meant to confirm the social status of the family and to convey the dignity, official function and authority of their human model. The means by which the required representativeness was attained included pose, body language, clothes, jewels, and various accessories. In powerful families these portraits accumulated with every new generation, and they were meant to secure the memory of the family line and simultaneously to demonstrate how deeply the family’s roots reached into the past.

With their display in the exhibition spaces, the artworks presented take on an entirely new autonomy. Their ancillary function, which has often been dominant, is transformed. It is precisely in the gallery setting that their artistic and aesthetic qualities take priority. Perceptive viewers may fully immerse themselves in the formal execution of the individual objects, with their profound beauty and grace. That said, the content of the works, and the socio-historical background of their production, continues to be of consequence. Artworks are important witnesses of their time and their documentary value is irreplaceable. The exhibited creations, however, speak in their specific tongue, their visual language, to the viewer. For a present-day person to understand this distinctive language of the artworks, he or she needs tools and a certain set of knowledge equipment to decipher it.

For medieval man’s artworld, realistic creation was neither important nor justified. Artworks were supposed to bring people nearer to God, and not to divert or distract the mind from thinking of Him by excessive formal elaboration. For this very reason, it was not thought necessary to portray figures with individual human features. In the Gothic period the range of human types are extended: the type of the apostle, type of the bishop, type of king and queen, type of the shy virgin, type of the soldier, and so on. One may encounter these human types in the present exhibition also. The best examples are the figures of four saintly virgins (St. Barbora, St. Margaret, St. Dorothy and St. Catherine) from the Marian Altar of Svätý Kríž. So that it might be possible to determine who was meant in the individual portrayals, the names of the figures depicted were indicated on inscription bands, or attributes were used. Such individual attributes (specific objects or animals characteristic of the particular figure) were particular favourites, very frequently employed. The richest source of attributes was the Legenda aurea (Golden Legend) by Jacobus de Voragine. Using the legends contained in this work, we can determine, for example, that the figure exhibited here of a man in bishop’s clothing with a bishop’s staff and mitre and several sods placed on a book is St. Nicholas; that the half-naked and bound man with arrows piercing his body is St. Sebastian; and that the young woman with basket filled with flowers is St. Dorothy. There are also other monographic works documenting the lives of individual saints. Torso of the Body of the Crucified Christ Obscured by the Wings of Seraphim was identifiable thanks to the Legenda Maior (Greater Legend) about the life of St. Francis, written by St. Bonaventure.

By comparison with the Middle Ages, the interests of the modern human being changed fundamentally. Attention was more and more removed from supra-sensual affairs and focused instead on Nature, of which human beings themselves formed part. This new perception of Nature and man was reflected also in art. Painters and sculptors manifested an ever-growing interest in physiognomy and the anatomy of the human body, and in their works they strove to capture the individual’s distinct features, including the emotional disposition. The neutral golden backgrounds of scenes, typical of the Middle Ages, were progressively replaced by landscape vistas, and often the portrayals of natural elements and vegetation were exceptionally detailed. Thanks to new advances in perspective, the overall composition of works acquired an impression of depth. One can detect the penetration of these new creative principles in the current exhibition, above all in the 16th century winged altars. In the scene of the Flogging of Christ by the Master of the Board of St. George, his intensified interest in human anatomy is evident. Equally, the contemporary clothing on the figures of Christ’s tormentors attests to the artist’s striving for creative realism. The faces of Christ’s tormentors are already highly individualised. On the wings of the Altar of the Holy Trinity from Okoličné, in the background to the figures of Saints Peter and Paul, blades of grass may be seen. While the portrayed stalks have a rustic and even folk-popular form, they are nonetheless evidence that their creator was not indifferent to Nature. In the scene of Christ’s Crowning with Thorns from the wing of the Altar of Svätý Kríž, elements of a contemporary interior may be deduced. Through the windows one has a view of open countryside, giving the scene even greater depth of perspective. Further testimony to the artist’s heightened interest in physical matters is the fact that the portrayed figures cast shadows.

The Origin of Painting. 15th - 19th Century Paintings, Icons, Sculptures is an exhibition of the best of the artistic work of five centuries, gathered over the years by the expert staff of the Liptov Gallery of Peter Michal Bohúň. Selected from the depository spaces and installed in the exhibition rooms, these works come newly to life in the presence of the viewer. Thanks also to the viewer’s personal aesthetic and emotional experience in their presence, and thanks to his/her subjective interpretations, the artworks take on new contents and significances, and their influence, their adventures, their “lives”, continue on further. 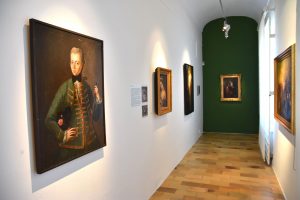 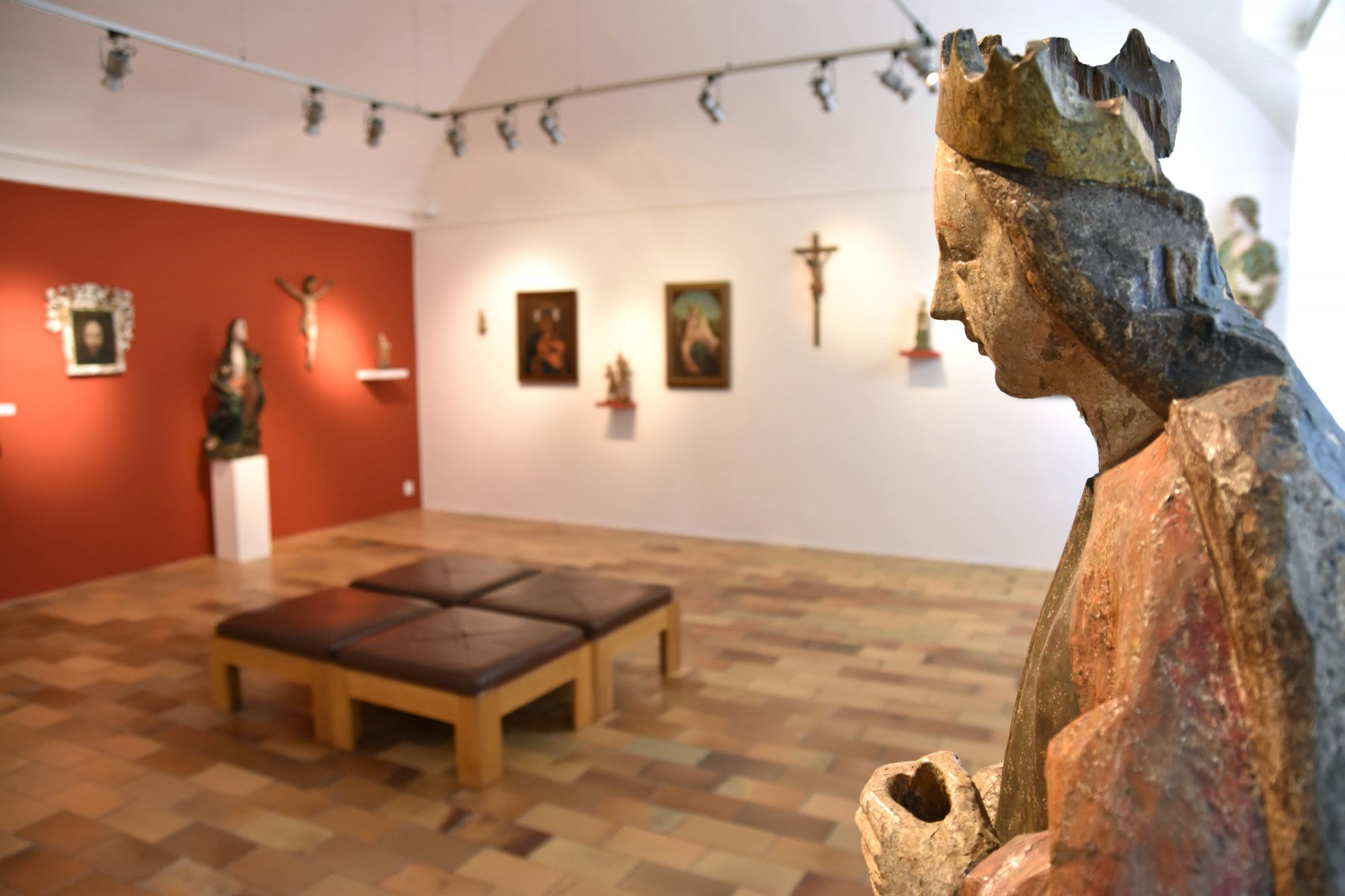 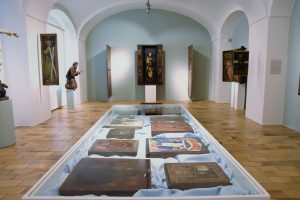