Liptov Gallery of Peter Michal Bohúň, can be found in the heart of Liptov’s beautiful nature. The gallery building originally housed an evangelist all-girls school where Peter Michal Bohúň (1822-1879), a painter born in Veličná in the Orava region, worked as a teacher from 1854 to 1865.

Bohúň painted portraits of townsmen and patriots, did altarpieces, created cycles of Slovaks dressed in traditional costumes, and pursued lithography along with photography. He played a vital part in the revivalist movement for the rights of Slovaks, being an active member of the Štúrovci group. Bohúň’s activities were grand no matter what, however, due to the fact that he was constantly living in poverty, misunderstood by his employers, and persecuted along with other nationalists during the period of strong Magyarization, he was forced to leave his country of origin and leave for the Polish city of Bielsko-Biała, where he later died at the age of 57.

He founded the concept of realistic portrait. His work is characterized by a tranquil, classical composition, harmonious colours, and amazingly painted details.

The painter’s mastery is evident by the sheer number of his paintings. Therefore the exhibition hall housing his work is called the Bohúň’s Hall.

In his portraits, Bohúň wished to remove the differences between ignoble townsmen and the members of aristocratic families. What’s also interesting is his signature which he was in the habit of hiding in the furniture next to the portrayed subject. The artist always painted married couples seated opposite each other.

While still studying in Prague, he did sentimental-genre paintings. These include a painting which was purchased all the way from Moscow – Plačúca žena v člne (A Weeping Woman in a Boat, 1845).

His artistically impressive work includes a portrait of Janek Kučera, the young editor of Slovenské národné noviny (1852), which was done 3 years after the death of the portrayed.

Portrét Vilmy Maťugovej (The Portrait of Vilma Maťugová, 1858) commemorates an important historic event – the Slovak National Assembly, or so-called memorandum gathering; the portrayed has a ring on her finger with an engraving which says „memorandum“.

Peter Michal Bohúň also painted Podobizeň Adolfa Medzihradského s manželkou Zuzanou (The Portrait of Adolf Medzihradský with His Wife Zuzana, 1875). Bohúňs corresponded regularly with the Medzihradský family, based in Dolný Kubín, which is why a number of stories from Bohúň’s life survived to this day. The artist lent realistic faithfulness and persuasiveness to his portraits.

Four portraits of the Hendl family (1879) from Nemecká Ľupča – today’s Partizánska Ľupča – are among the last paintings done by the painter before his death. The portrait of Antónia Hendlová (1879) shows nice details of her jewellery. The portraits, especially those of women, are deeply felt.

Subjects of interest include the portrait of Marienka Medvecká (1877). Here, Bohúň conveys the difference between a living being, i.e. a child, and her wooden doll. The light plays an important part in this painting, one of Bohúň’s few to portray children’s toys.

Bohúň’s work gained admiration and recognition not only in Slovakia, but also abroad. 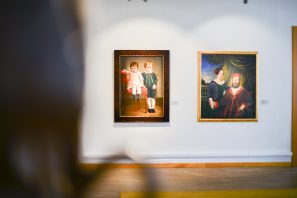 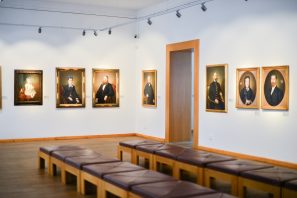 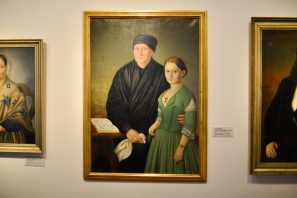