The exhibition contains collection items from the P. M. Bohúň Gallery, Liptov and borrowed exhibits from the Slovak National Museum in Martin. We present the Gallery’s visitors with artefacts (icons, altars, sculptors, oil paintings) divided into separate time periods (Gothic, Renaissance, Baroque, the beginning of the 19th century). The exhibition is academic in nature and its concept will be gradually changing and supplemented with further collection items. Each work tells its own artistic-historical story about its genesis. Examples of portrait paintings from the 17th and 18th century include a collection of three portraits by an unknown artist, with an unusual approach to depicting the eyes of the portrayed.

A central panel of Saint Anne with Mary and the Trinity (from the turn of the 18th century), a painting Adorácie oltárnej sviatosti (The Adoration of the Holy Communion, 1545) below. Two double-sided panels form one sash of the altar – Paul the Apostle/Flagellation of Christ and Saint Georg/Resurrection (1545). Originally a part of the altar at the church of Saint Anne, the panels were moved to the inventory of the church in Prosiek where they were discovered in the 1960s. Used as a part of a chiffonier and as drawer-bottoms, they were gradually treated and restored in the LPGMB.

Sculptures from the 18th to 19th century:

A female saint, displayed with hands for the first time since restoration.

Immaculata: (the first third of the 18th century), a baroque sculpture, shows Saint Mary as a symbol of immaculate conception – placed on a sphere, with a snake as a symbol of temptation wrapped around it. As a point of interest, the snake has human teeth.

About Saint Barbara – she was born in the 3rd century AD in Nicomedia. Her father locked her inside a tower in order to shield her from Christianity. Despite this, a priest disguised as a doctor baptized her. Barbara was then put on trial, and later beheaded. She became the patron saint of miners, carpenters, fire fighters, and stonemasons. Attributes: tower, golden crown, palm leaf, chalice, and sword.

About Saint Catherine – according to the legend, she was a Christian virgin and martyr, living in 4th century Alexandria. She publicly appealed to the emperor Maxentius against the worship of pagan idols. Having rejected his marriage proposal, she was imprisoned and then tortured. Maxentius decided to kill Catherine on a spiked breaking wheel. The wheel, however, broke down and she was beheaded instead. Saint Catherine became the patron saint of all profession involving the use of a wheel (millers, wheelwrights, seamen, etc.) Attributes: broken wheel, sword, golden crown, lily, and palm leaf.

About Saint Martin of Tours – born in the 4th century AD, he was a soldier, and later a bishop in Tours. He’s known for an incident with a beggar who was entering the town of Amiens. Martin cut his own soldier cloak in half, giving one of the pieces to the beggar. After that, he kept having a dream where Christ himself was cloaked in the gifted half. This experience brought Martin to conversion. Attributes: beggar, sword, cloak, and bishop attire.

About Saint Brice – living in the 4-5th century, he was taken into custody by Saint Martin. Not interested in fulfilling his duties, he often overlooked them. Saint Martin criticized him for this and said that after his death, Saint Brice would succeed him as the bishop. Brice was accused of fathering an illegitimate child. In order to prove his innocence, he brought hot coals to the grave of Saint Martin without being burned. However, he was still exiled, and spent the next 7 years in Rome where he was proclaimed innocent. Attributes: coal, bishop attire, and a child.

Come and discover the charm of old art with us. 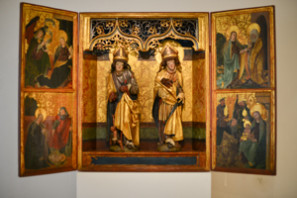 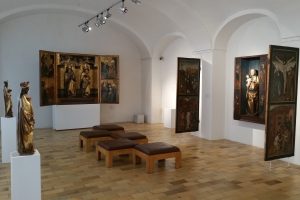